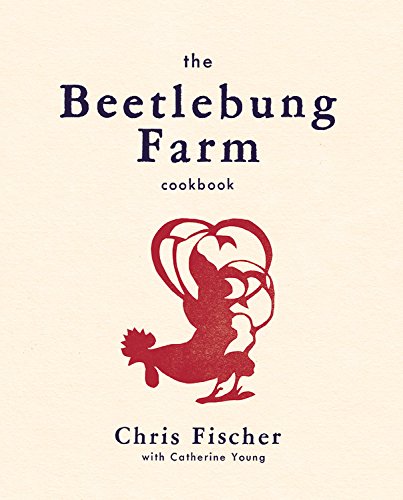 The Beetlebung Farm Cookbook: A Year of Cooking on Martha's Vineyard

Martha’s Vineyard raises thoughts of long summer evenings spent lounging on the dock or entire days out on the water. For Chris Fischer though, despite having cooked at restaurants in New York and London, he never lost the image of his grandparents’ farm, only several acres of land dedicated to the produce that would accompany their daily catch from the sea, a rabbit taken in from the woods, or serve as the primary part of a meal on its own.

In The Beetlebung Farm Cookbook, Fischer reflects on the farm, how his grandfather prepared and cared for it, and the appreciation for the land it encouraged: “Poppy’s garden was always planted densely, first with peas, onions, and shallots, as soon as the ground could be worked. Then came beets, carrots, lettuce, and potatoes. As the days grew longer and the crowds began to arrive, he would plant his beans, tomatoes, green peppers, and eggplant, the rows in the garden supplementing those in the field. He got his tomato cages ready early, all neatly lined up like soldiers, months before the plants would go into the ground. Then began the countdown of days until his vines boasted ripe beauties. Anticipation, he often said, was his favorite part of farming.”

This book shares the recipes that represent the farm’s essence, the challenge of each day’s work but also the extreme reward in harvesting what you have worked all season to produce. Each section is prompted by a menu of the recipes which follow, though first given context by Chris’ writing, often a story or vignette reflecting upon his life at Beetlebung and the memories he’s gathered in the field and around the table. Though the subjects of Chris’ writing could easily turn his style to the sentimental, he restricts himself to a territory that is nonetheless reflective and beautiful:“I learned many things from Serena, including how to properly make a salad. She was very fond of the greens mix Marie sold. In those days Marie tended toward a combination of mustard greens, red Russian kale, several types of lettuce, and mizuna, all picked quite young before the spiciness of the mustards got too intense. She finished each bag with fennel fronds, nasturtium flowers, and fresh leaves and blossoms from the herb garden. Serena began my lesson by emptying a bag of the cleaned greens into an over-sized salad bowl. ‘It has to be big,’ she explained, ‘you need plenty of room to toss.’ [...] We’d lightly salt the salad then gently toss it once or twice before eating it together -- the perfect mid-afternoon snack.”

Everything about this book moves slowly -- we pour over the recipes excitedly, but stop ourselves to savour them all the way through. We imagine ourselves sitting at the table of one of Chris’ all-night dinners, beginning early in the evening with a marinated Anchovy and Island Egg Crostino, waiting until well after midnight to begin your Maple Ice Cream, absorbing the melted pools with his Ginger Cookies.

I’m most drawn by the Beet Cake with Fennel Icing, the beets lending a moist crumb and vibrant color to the cake, with a beet jam sandwiched between the two layers. This is the natural and time-honored practice that many now have substituted with red artificial coloring. Fischer takes it back to the land, creating something that seems as imaginative as it is practical. Though children are usually the last to refuse a dessert, Chris suggests revealing the ingredients only after they’ve tried it. Nutrition in cake form -- a brilliant way of getting your kids to eat vegetables.

12 generations of family legacy finds its way into every aspect of the farm. Reading through the recipes and meditative prose, we get a sense of the land’s profound effect upon Fischer’s approach to cooking and its even greater effect upon his life. We learn alongside him that family tradition serves as the foundation for what we create in the present. It is a lesson we learn from every ingredient, every menu, and every page.