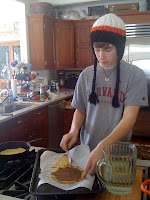 When Matt Finnerty, my step son, found jars of Nutella in the pantry he immediately asked me if I knew how to make crepes. And I answered with a sly smile, "But of course!!"

"Well, okay," he said, "so let's make them." Such exuberance cannot be resisted.  And I love the fact that a 14-year old has developed a taste for crepes with Nutella spread on them. He had them when he was in France with his Mom and 2 sisters and hadn't seen Nutella since then. Just the very sight of Nutella brought his memories of a big fat french guy making large fluffy crepes with Nutella. He said they were, "the best!!" Matt wanted to get right down to making them ASAP. What I had to explain is that crepe batter must be made ahead -  it needs to sit for a few hours so the flavors meld and the flour hydrates.

We made the batter on Saturday afternoon. We made the crepes on Sunday after a vigorous snow shoe outing - so we earned them!! 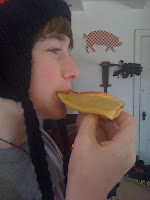 Using a well-seasoned crepe pan or non-stick 5-6" frying pan, heat on low-medium flame, brush pan with canola oil or melted butter. (I usually do a tester before I really get started to make sure pan it hot enough etc.)  Then ladle the batter into the pan and swirl it so it spreads into the entire surface. Cook until the edges start browning and top seems dry.  I use a fork but a spatula would do the trick as well to loosen the edges.  Then flip the crepe and let it cook for a few seconds. (I find this is a feel sort-of-thing - you just can tell when it's ready!!)

Matt took each crepe as it came out of the pan and spread Nutella on it.  He ate several on the spot and took the rest back with him to his Mother's house to delight in at a later time.

I don't know about you but there is NOTHING more satisfying than making food that makes people happy!! Thank you Matt!!