Spend an hour listening to host Carole Murko interview German Sachs about her culinary history. She is 100% Italian and cherishes all her memories from her early childhood in Italy to her career as a butcher. But mostly her passion for cooking the old-fashioned way and preserving her family traditions is what resonated with Carole and makes Germana the perfect guest on Heirloom Meals Radio. Can't wait to try some of Germana's recipes!!

I inherited my Mom's love of all things kitchen and tabletop.  She always had such a pretty tomato server.
So when I was in my 20's and frequented flea markets nearly every weekend with my Mom - guess what I found? 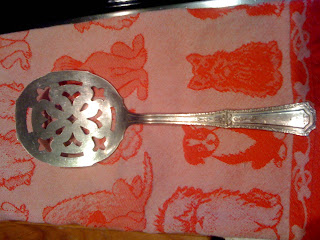 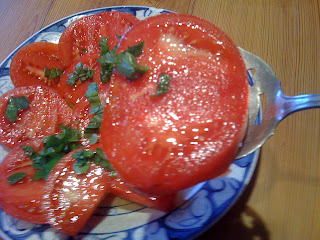 It's a throw-back to the Victorian era when they had a utensil for EVERY purpose!! Serve away!
Total Comments

Basking in the afterglow of a great time with the news team from Albany's NBC affiliate - WNYT - Newschannel 13 - Dan Bazille and Tim Drawbridge!!
[youtube=http://www.youtube.com/watch?v=bfudby5gaRs?fs=1]

Jo’s (my Mom’s) Apple Torte
Our family loves cheesecake and we love apple pie.  So way back when, my Mom who tends to be pie crust challenged, decided to do away with the frustration of a rolled pie dough and combined her cheesecake acumen with apples to create the simplest and most delicious winner. Try it - it will impress your friends and your taste buds!!
Crust
1 cup flour
1/3 cup sugar
1/2 tsp vanilla
1 stick butter, chilled and cut into small pieces
Cream Cheese Filling
2 - 8 oz. packages of cream cheese at room temperature
1/2 cup sugar
1 tsp vanilla
2 eggs at room temperature
Apples
2 large tart apples such as Granny Smith - peeled, cored and sliced
1/4 cup sugar
1/2 tsp cinnamon
1/2 tsp vanilla
1/3 cup chopped walnuts
Preheat oven to 350 degrees.
Combine flour, sugar, vanilla in a bowl and then cut in the butter until the mixture resembles coarse meal.  Press into bottom and up about 1” of the sides of a 10 inch springform pan.  Bake for 5 minutes, cool to room temperature.
Increase oven temperature to 450 degrees.
Beat cream cheese, sugar and vanilla with an electric mixer until smooth.  Beat in eggs, one at a time.  Spoon mixture into crust.
Mix apples sugar, cinnamon and vanilla.  Spoon over cream cheese mixture and then sprinkle with walnuts.
Bake for 15 minutes and then reduce heat to 350 degrees and bake another 45 minutes  until your tester comes out clean.  Cool on a rack and then carefully remove sides of springform pan. When completely cool, turn upside-down, remove bottom of pan, place plate on top and flip over.  And ENJOY!!!
Total Comments

Life at Boulderwood:
The Grass is Always Greener

Animal Tales from Boulderwood Farm - the Grass is Always Greener on the Other Side. Isn't it?
When the whinnying and the mooing sounded like it was coming from my back door....well, it's because it was.... 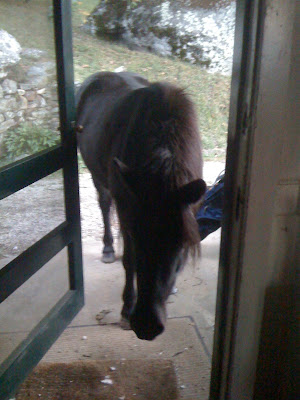 The entire herd - all three horses and all three cows were acting out the great escape the other night and partied like it was 1999. Julia was eating apples right off the apple tree; Mr Johnson stuck his head over the fence of my veggie garden and ate some broccoli; and the horses, horsed around all night - I don't even want to tell you where I found hoof prints.

I guess it's something in the cool, fall-like evening air...or... perhaps the grass really is greener on our side of the fence!

Today - it's all about sharing my pie recipe testing for Gina Hyam's Pie Contest in a Box.  My friend Karen Lee came over to test "Grandma's Brown Sugar Pie".  So here's how it went (the recipe will be at the end of this post):
The first task was to make the pie crust.  According to the recipe I need 1/3 tsp salt.  Now mind you, I am well-stocked in the kitchen gadget realm and finding a measuring spoon with a 1/3 tsp was not happening.  For many, this would create a problem - it's obviously a little more than 1/4 and a little less than 1/2. If the crust doesn't seem to come out right - one might worry that they put in too little or too much.  Next, the crust requires LARD.  While I am a purist and love to use heirloom ingredients, I know LARD is not something you can just run out the grocery store and find.  I would suggest an alternative if you can't find LARD.


The directions for making the crust were good.  I am not sure most people would understand "smear" - I would elaborate: "use the heel of your hand to smear the dough against the side of the mixing bowl several times. This smearing action will create a multitude of small layers in the dough, causing to act almost like a puff pastry; the result will be a light, fluffy dough, rather than a dense, heavy one."


I think you should pre-heat the oven when you are rolling out the pie dough. 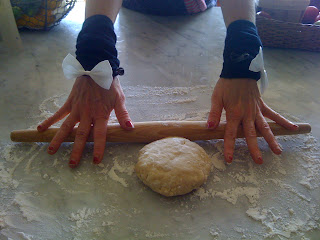 We found that the pie dough should be more like 11-12" round to amply flute the edges. 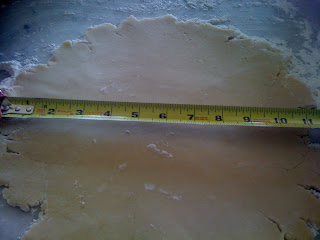 If you use a old-fashioned pyrex dish that isn't rated to go from fridge to oven - I'd be careful about chilling the crust before placing it in the oven. 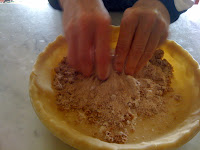 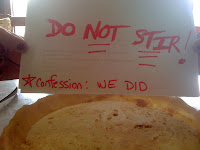 We didn't like the looks nor the ingredients in the evaporated milk so we opted for the light cream because it is fresh!!  And Karen jumped ahead and stirred the mixture ever-so-slightly until I read DO NOT STIR!!  Oops - and will this be a problem??  Karen felt the need to stir because it wasn't clear that the brown sugar mixture should be "evenly" distributed - perhaps adding "evenly" would help. 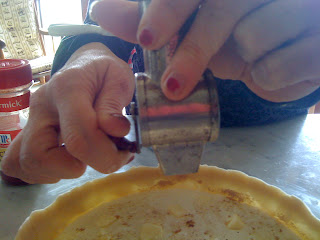 We sprinkled nutmeg and cinnamon, but really - how much? We covered it but not densely - we weren't confident. 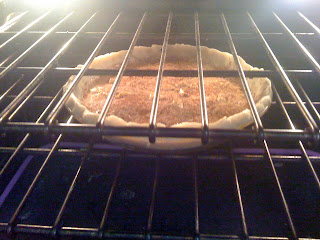 And, to the oven it went - but alas - where - middle? bottom? in-between?  We went for the middle. 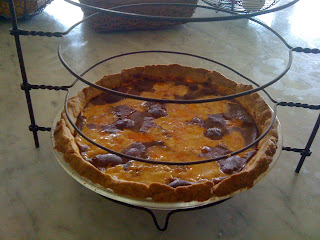 I'm no pie judge but the finished product was not satisfying.  We were bummed!!
On the flip side - pie really does equal peace as Karen and I had a great 1+ peaceful hour together - mixing, chatting, giggling - so in my book - making pie is a bast and should be done with friends and family and served with love and laughter!!
Thank you Gina for the opportunity and Karen for the company!!
And on second thought - I am not sharing the recipe until the changes are made....
Total Comments

Melons and Farm to Table thoughts by Laura Meister. This is by far one of Laura' best newsletters in my humble opinion.  Thank you Laura!!

I was a city girl. More accurately, I was a suburb girl, and in terms of understanding food, I’d say this is actually much more of a handicap. My food came from the grocery store by and large, although to give my parents some credit and not to paint the situation in completely black and white terms, we did have some great tomatoes in our backyard garden. Still and all, the aggregate effect of the location and time of my upbringing caused me to miss out on some spectacular eating experiences and even a couple years into growing food, I still didn’t know what good was.

During my second season at Farm Girl Farm, I brought an experienced farmer friend to my melon patch to show him the disappointing results. “See?” I sighed, “I blinked and I missed them. They are all too ripe now, they’re rotting.” My friend laughed and grabbed the nearest muskmelon, with a rotten spot and a dent in the skin where ants were beginning to enter. He deftly removed the bad spot with his knife, cut the melon open, held it first to his nose and began muttering to himself, “Extraordinary”—then devoured the entire fruit in what seemed like one long slurp-bite. “My god its been years since I’ve had a melon this good,” he said. “There’s just nothing like it. You can’t get melons like this anywhere. You’ve got a gold mine here.” Lesson learned. Each summer since then I’ve proudly delivered him one muskmelon, preferably with at least one opening in the skin, the late-summer prize for patience and connoisseurship.

What I still wasn’t entirely getting about the “farm to table” concept was the beauty of skipping the step where a vegetable or fruit spends a few days in between the field and one’s plate, whether that be the grocery store or the farmstand. Coming to the farm to get one’s veggies, literally right out of the field, means access to the melon that would never have made it to the store, the melon that is so ripe it is about to burst through its skin to spread its seeds and start the cycle all over again, the show-stopping tomato with a kaleidoscope of colors and one tear in the skin or small bruise—vegetables that are at their peak of taste but that wouldn’t survive the one-week or even three-day transportation and holding period involved in the retail process. This is the good life!

So fear not the melon bursting out of its skin or the 1-pound tomato with a dime-sized soft spot. It’s not everyday you get to experience such a fruit. And winter, and California vegetables, are nipping at our heels. So enjoy.


For those of you interested in learning more about how to tell if a melon is ripe in your own garden or to see the process we go through to bring the melons to the CSA table, here is a good webpage: