Life at Boulderwood:
A Boy and His Dog

Burtee and Matt surveying their kingdom!!
I love shots from behind and to me there's nothing better than seeing the bond between a boy and his dog. 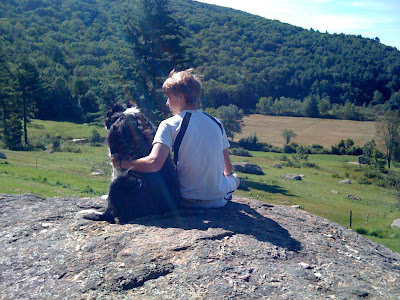 Many of my friends are melancholy. And yes, so am I.  While the 90 degree temps last week seemed to keep summer present for a bit longer, the recent cool off, earlier sun sets and autumnal colors are augurs of the next season.  I am not quite ready.
So today, I want to reflect and write about a person who made my summer exceptional.  Her name is Erin Russo. 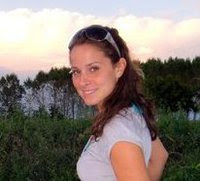 I advertised for a Smith College intern (remember Smith is my alma mater) and received several applications but Erin was a stand out in so many ways!!  She was smart enough to read my blog and tailor her letter as a result, she was an anthropology major and understood why I called heirloom meals "salvage anthropology for treasured family recipes," and she had a great attitude and personality.
Erin catapulted Heirloom Meals' progress in three months. We started a facebook fan page, developed an editorial calendar for the blog, booked radio show guests, successfully ran a kickstarter fundraising campaign for a new website, wrote all the content for the soon-to-be-launched website, planned and threw a fundraiser for Berkshire Grown with Sarah Gray Miller from Country Living Magazine etc.
The best part is we had fun while working hard, she was the angel I needed and became a dear friend, sister and daughter in the process.
Here are a few photos of our journey:

I love it when my food and recipe comfort zone is challenged and blown wide open.  This past week had two occurances.  The first was over the weekend when our friend David Moore, a race horse owner asked me to cook up a casual dinner for 8 to be shared after the Traver's Cup Race in Saratoga Springs, NY.  He said, "In the interest of this being an heirloom meal, my guests who are also my 2 brothers and their spouses, thought you should make corn pudding."  I said, no problem.  And as I always do when asked to make something I've never made before, I googled corn pudding, printed a couple of recipes and then adapted them into my own.
I thought I was making DESSERT!!
You can only imagine how surprised I was when David put the corn pudding on the table. I proclaimed, "Shouldn't we wait until after the main course?" To which David responded, "It is part of the main course."  And I burst out laughing, admitting I thought it was dessert and I even made whipped cream to go on top!!
And boy was it delicious; a perfect side with grilled hangar steak, chicken, fresh green salad and roasted potatoes. Here's my recipe:  This is a keeper and I was told it was better than their Dad's!! Oh and did I say SIMPLE!!

Preheat oven to 350 degrees. Butter a square 8 x 8 baking dish. Blend all the ingredients in a food processor for about 3-5 minutes until corn is nicely blended while still retaining some texture.  Pour into baking pan and bake until golden brown, about 35-45 minutes.  Cool and serve warm as a side or as dessert

And Springerle Cookies were introduced to me by one for my radio show guests (see my Wednesday blog post for the interview).  I am in love with the exquisite molds, the rich history and the taste and texture of the Springerle Cookie.  They may well become a part of my Christmas cookie baking tradition!!

I am so very lucky to have these experiences!!

As Summer winds to a close at least we have tomatoes to look forward to and thanks to Laura and other farmers we have a great crop - so I am going to be a canning wonder-woman this weekend!!  Here's what Laura has to say this week....

August 31, 2010
Hi all—
End of summer?  Does NOT feel that way.  Although I did wonder if my alarm was mistaken this morning when it seemed to be pretty dark at 6 am…but with 90 degree weather and sun, sun, sun, the cold fingers of winter don’t seem to have quite the grip around my throat that they sometimes do at this time of year.
Although, as the commercials say, “we’ve got plenty of summer left” in terms of tomatoes and watermelons, it is true that kids are returning to school, summer birds are starting to migrate  home to The City…sure signs of fall. And for the summer share CSA members, this week does mark the end of our time together this year.  Thank you, summer share people, for a great season!
Meanwhile we are doing our best to keep getting fall crops in the ground while we try to keep up with the tomato harvest, the perpetual late August/early September dilemma..  We have beets, radishes, carrots and broccoli raab sown, we have new kale and swiss chard seedlings in the ground, and several flats of bok choi and head lettuce awaiting transplant.  We’ll also soon be harvesting baby bitter greens and arugula again, as soon as the leaves size up just a bit more.  We’ll have some baby leeks for you—these babies got pretty engulfed in weeds so they’ve been taking their time growing up, but they are on the way.
I’m looking forward to harvesting pumpkins and winter squash—we haven’t grown much or any of these for the last several years because they are such space hogs.  But our new field afforded the space we needed, and so far the plants and fruits look great, so here’s hoping!  We did get these plants in somewhat later than ideal because the preparation of that new field took longer than we wanted it to, but if you take a walk out there or slow your car down on your way out of the farm, you can see some gorgeous acorn squash and pumpkins lurking beneath those enormous green leaves.
Some of you who’ve been with FGF for our entire six seasons will remember Marne Litfin, apprentice extraordinaire during our second season, 2005.  She made a guest re-appearance in 2006, and has been traveling the world and learning about all things food and farming.  This past summer she was on staff at my beloved Farm & Wilderness and upon hearing that we had a couple of helpers depart early this season, she wrote to say she had a few weeks between camp and her next gig in Germany, so here she is, reunited with the cherry tomatoes.  We are SO GLAD.
Other than all that, I’m hoping for some rain which will further all of the above endeavors!
Enjoy the veggies this week.
--Laura Meister, Farm Girl Farm Farmer
Total Comments

Have you ever heard of a Springerle cookie? Ever imagined the labor of love that goes into making them? Listen to Carole Murko’s interview of Connie Meisinger, owner of House on the Hill - a Springerle mold and cookie company - to learn about these beautiful cookie molds and the story of how this delicious and ancient cookie recipe became Connie’s passion.

Connie grew up as an air force brat and lived in many places. Her Mom’s culinary bravado and experimentation instilled an early confidence in Connie’s own culinary prowess as evidenced by Connie’s willingness to take the baton from her grandmother, Nini who could no longer make the family’s traditional Springerle cookies. To avoid a family catastrophe, Connie embraced the art and tradition of making these cookies for the family for the holidays. And through a series of events, Connie was fated to own a Springerle mold company.

There is one reason we can’t wait for the first frost - so we can make our first batch of Springerle cookies - a tradition that might be worth starting. Thank you Connie for sharing your passion and opening up our culinary vernacular to include Springerle cookies!! Visit www.springerlecookies.com for more of Connie!! 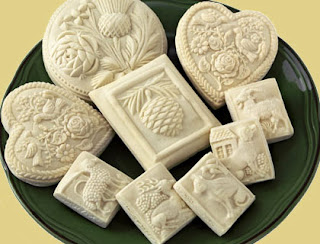 p.s. We had some station difficulties with the microphone and the prior radio host stole off with my CD. I think we recovered with grace but apologies to Connie. Here’s what your introduction was: “And today we are introducing you to Springerle cookies - a bavarian molded cookie - and to do so my guest is Connie Meisinger .....” 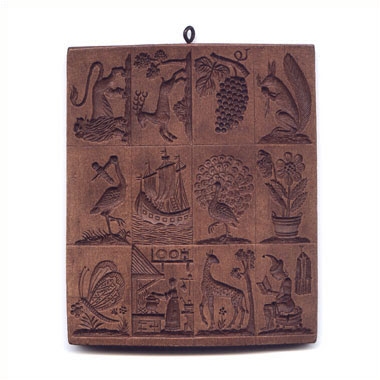