Really, it's spaghetti bolognese. I had an old British boyfriend that called it spag bol and it stuck. Leave it to a Brit to rename a tasty Italian dish.
What I embrace about these cooler, darker days is cooking comfort food and in particular, a Friday evening when the kids arrive. I am a broken record about this... But is there a greater pleasure than making your kids(step kids) their favorite dishes?

So here's my recipe/concoction
2 Tbsp olive oil
2 Tbsp butter, unsalted
2 medium onions, chopped
3-4 carrots, chopped
2-3 celery stalks, chopped
2 lbs of ground chuck or a combo of beef, veal and pork in equal proportions. One additional point is if you can find grass fed chuck, try it - it provides such a robust flavor you may never use anything else. I used 2 lbs ground organic grass fed chuck for this evening's sauce.

Melt butter and heat oil in large saucepan. Add onions, carrots and celery and sauté until they begin to soften, around 10 minutes.

Add meat and cook until no longer pink.

Add milk and season with nutmeg. Continue to cook until milk is cooked off. Next add white wine and cook until it is evaporated.

Add tomatoes and cook for another hour or so on low.

Serve over spaghetti, linguini, or pasta of your choice. Because Jim has celiacs disease, I use a gluten-free pasta and it's yummy too!

- Posted using BlogPress from my iPad

As usual, Elizabeth Keen is the great farmer/philosopher!!
News from Indian Line Farm
A flock of wild turkeys have taken up residence at the farm this summer.  Fourteen birds sleep in the trees just west of our house and meander their way down to the farm fields every morning.  I catch myself laughing as occasionally Harry and Rainbow the cats will herd them a little faster in whatever direction they are traveling. By the time we make our way down to harvest they are in the front sections near the greenhouses munching away on bugs and bits of green. They have been here since the little ones were just chicks and they are now full grown to my untrained eyes.  In all these months we have never seen any damage from their passing. They seem to have stomachs for the things we don't eat. By 9:00 am they have usually headed south across the hay field to wherever they spend the rest of their day. They return about 6:00 pm again meandering their way through our electric fence and into the vegetables.  We most often notice them coming up the hill as we are sitting down to dinner.  We almost always comment to each other that they are headed home for the night and Colin can rarely let the moment pass without jumping up and watching them pass.  There are so many of them.

I have seen turkeys move freely about the farm in the past but they usually travel in a north to south pattern and most often as far from the house as possible.  I suspect that the absence of our old dog Brantley has opened up possibilities for this new flock.  I have yet to do research on the habits of wild turkeys but I suspect they will soon migrate to a warmer location for the cold of winter. One day I will realize they have gone. I am pleased to have them here now and hope that some will return to lay eggs next year.

I have been pondering the idea of this farm as a gathering place for creatures of all kinds.  We have a healthy wildlife population:  deer, raccoons, skunks, bears, opossums, ground hogs all live here or at least make sightings multiple times a year.  Of course there are birds of all kinds and the reptilian population seemed especially strong this year. I have never seen so many frogs! Equally as important are the insects that congregate here.  I tend to remember the least desirable of this category as they can do the most damage to the vegetables.  Tomato hornworms, cucumber beetles, peach colored aphids, flea beetles, white flies, cabbage lopers,  Japanese beetles, and Colorado potato beetles are just a few of my least favorite creatures.  But we do have monarch butterflies, swallow tails, parasitic wasps, lady bugs, tons of spiders and other creepy crawlies we encounter in our day.

And then there are the human creatures which fill this farm with hard work and toil and manage to bring forth amazing food.  On some days the humans are quiet and steady (except for when we need to blast the radio to hear NPR or listen to our favorite radio station) and on other days this farm is bustling with cars and more humans big and small. Just as I am pleased to have our wild turkey friends this year, I am glad to have all the humans that call this farm their own.  After all, without them, we would not know who we were growing for.  I hope they too return in years to come.


For the farm crew,

Elizabeth
Here's some of our "take"from this week:  carnival and delicata squash.  Stay tuned for recipes - oh so simple!! 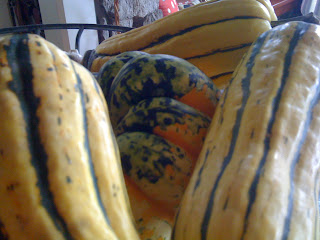 Today, Jo Bracken was to be a our guest but technical difficulties arose - we could hear her but she could not hear me.  Not the best scenario for an interview.

With that said, the daughter of the iconic cookbook writer, Peg Bracken has just revised and republished for its 50th anniversary, The I Hate to Cook Book.

Imagine growing up in the 1960's with a Mom who had the courage to tell it like it was!  Peg Bracken was as witty as they come!!  She was one of those people who hated to cook but mastered the art of using canned soups, cake mixes and well-greased casserole dishes.  Her wit and humor is scattered throughout the pages intermingled with such recipes as Sub Gum Yuk, Turkey Divan, Chicken Rice-Roger, CanCan Casserole and Hootenholler Whiskey Cake.
This book is a classic, if not for the recipes , but as a period cult classic - the generation that embraced the new industrialized food - using them to liberate them from toiling in the kitchen.  And I confess, I might make the spinach surprise and the Chicken Rice-Roger (that is if the canned soup is low sodium, has no MSG or preservatives) for the fun of it!!
Total Comments 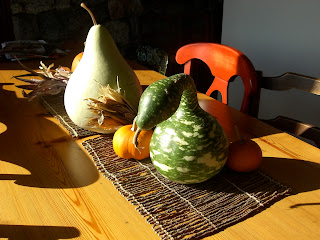 I bought these gourds and wanted to make a great fall table centerpiece but they looked naked without a table runner.
Brainstorm: I had these great twig placemats in the cupboard and thought they would make the perfect backdrop for the gourds.  What do you think?
And as it turns out - it's a great tip - use 2-3 placemats to create a table runner.
Total Comments

Sometimes people are placed in your life to inspire you.  I met such a person last night - her name is Alex Elman. She doesn't yet know that she had such an impact on me, but she did.  Her story - inspiring!
We spoke about organic farming and organic wines and I was excited to see if perhaps she might want to be a guest on my radio show, and better yet, a guest wine blogger.  You see, Alex is a wine expert and has started her own label - Alex Elman Wines - Authentic Wine Treasures that are natural and organic. Alex is also blind.  I tip my hat and raise my glass to Alex!! 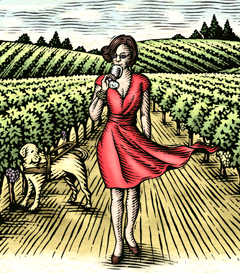 "These wines are the best examples of what they are and where they come from. They are wines that are honestly made," she said.
Elman goes for wines that are organically produced, and has picked four with which to launch her company: a Chardonnay and a cabernet sauvignon, both from France; and a red, a Malbec, and a white called a Torrentes, both originating in Argentina.
The wines go for $12 to $15 a bottle, and Elman wanted them to be good enough for people to bring to a party, and affordable enough for every day.
"I'm not someone who is out there telling you what to drink," she said.
"What we're trying to do with Alex Elman Wines is to take a lot of the guesswork out, because when you walk into a store there are so many wines.
"I would really like this to be people's go-to wine," she said.

I can't wait to taste them!!  Thank you Alex.

Doesn't everybody serve their chickens a fresh-baked pie for breakfast? 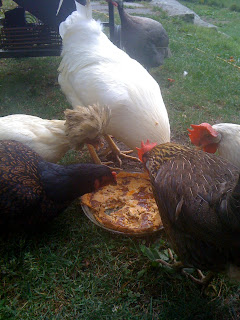