You guessed it....I am sharing my Stuffed Zucchini Concoction from last night. 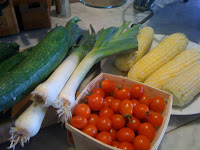 Preheat oven to 400 degrees
For the "stuffing"
Cook corn and remove from cob. Prepare Quinoa according to the package instructions.  Saute over medium heat chopped leaks in a couple of tablespoons of olive oil until soft, add corn and tomatoes, chopped garlic until golden, add quinoa, basil, salt and pepper. 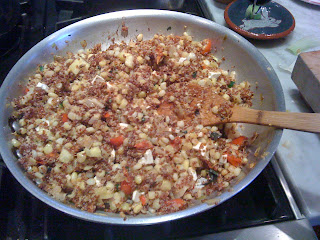 Clean zucchini, cut in half crosswise then lengthwise.  With the point of your knife, score the flesh into cubes and then scoop out and add to your stuffing mixture, continue to saute for a couple of minutes, then remove from heat and set aside.

Place zucchini shells in a baking dish with a little water, cover with tin foil and put in center of the oven for 10 minutes to "cook" the shells a little.  Remove from oven, and carefully add stuffing to each zucchini shell, pressing stuffing in with the back of a spoon.  Once stuffed, liberally sprinkle the top with cheese and return to oven for 15 minutes until cheese is melted and golden. 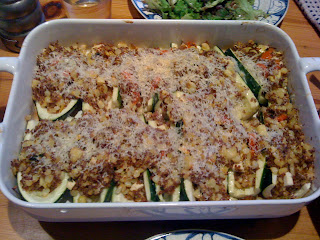 Serve with a side salad and Enjoy!! 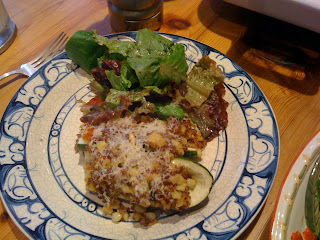 Thoughts on my own crops and Indian Line Farm....

Well...for whatever reason Farm Girl Farm's newsletter is not readily available to share and because today is the day dedicated to farming I thought I'd speak of my garden's bounty and introduce you to Indian Line Farm - the first CSA in the country.  Elizabeth Keen runs quite an efficient and beautiful farm. Every time I pick up my share I am just in AWE!! 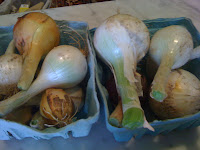 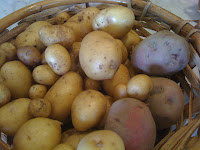 Out of my patch of dirt this week I harvested potatoes, onions and will be picking some broccoli for dinner tonight.  This time of year is so fulfilling and healthy. I have become a veritable vegetarian.  Tonight I plan on concocting stuffed zucchini with quinoa, fresh corn, cherry tomatoes, leeks and basil. Served up with a side salad of delicate Indian Line Farm greens and we are in veggie HEAVEN!!


And now:   News From Indian Line Farm
c/o Elizabeth Keen
What a great summer we have been having!  Warm sunny weather making it great for afternoon/early evening swims.  No need for the rain gear like last year when they never dried out between rain storms.  But wow has it been hot!  We always start out the mornings with rain pants just to keep the dew off our pants, but this year we can't get them off soon enough before it feels like we are sitting in a sauna.  And the sweat by midday is dripping down our backs with such vigor that we have decided Indian Line Farm should open a gym.  We can supply all the ingredients to good health:  cardiovascular workout; strengthening by regularly carrying 40 # bins and buckets; and stretching, bending and reaching for flexibility.  Honestly, today the heat got me down.  We need a big rain.  Everything is really dry.  I can't really irrigate everything that really needs it.  I noticed the leaves on the corn on route 23 curling to maintain moisture.  The  is low enough that is some places we had to get out and push our canoe on Sunday.

Heat makes me think of zucchini.  We have a lot right now as we are still harvesting from our 1st planing which is still going strong and our second planting is gorgeous and putting out green beauties.  On Friday alone, we harvested 308# of squash and zucchini.  In response I had an all zucchini dinner:  savory zucchini pancakes topped with sour cream and fresh tomatoes and for dessert a double chocolate zucchini cake.  Marvelous!  I was going to make a raw zucchini salad, but decided against it.  I have included several zucchini recipes for you too, to enjoy this week.  And watch out if you park too long in the lot, you might find an extra zucchini in your front seat!
Total Comments

What do cow tales and food memories have in common? Well, actually quite a bit!! Host Carole Murko interviews Christine Lindemer, curator and editor of True Cow Tales, a book of authentic, heart-warming recollections written by the farmer’s themselves. Christine has helped save some of these stories from becoming extinct, much in the same way that Heirloom Meals is doing for recipes. Christine grew up on a Minnesota dairy farm within a few blocks of her Swedish and German grandmothers. In preparing for the interview she was reminded of her grandmother’s “swedish coffee” - an interesting concoction to be sure!! And now Christine and her husband have their own “connoisseur” apple farm where they also raise belted galloways. Christine’s story is what we aim to capture on Heirloom Meals Radio - one where the unexpected happens - where memories of food and family are dusted off or unleashed - and the keen appreciation of those memories is recognized.
Total Comments

The Bathing Beauties of Boulderwood.....who knew cows love to wade?? Julia, Delilah and Mr. Johnson (who I guess is a bathing beast) ignore the fence and just step right in the "pool."

As I got closer, they turned... 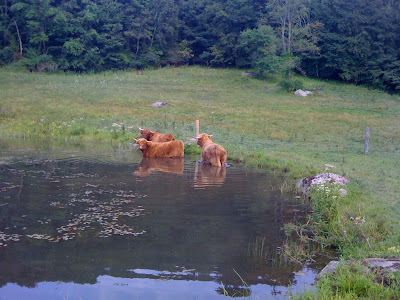 
I love our animals.

We've got lots cooking but not in the kitchen....
I am in full gear on the preparations for the Country Living Magazine / Berkshire Grown event at my house on August 22nd!!  And I know the devil is in the details. 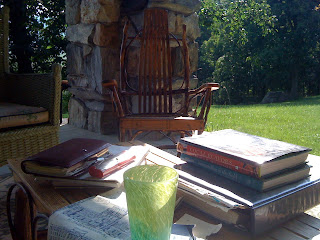 Menu planning is in full swing. I spent Sunday afternoon making my lists!! We are expecting 30+ guests to share in an authentic farm to table dinner. We'll tell all about the menu and the cooking prep as we get closer to the event.  Right now - it's all about the table setting....

I was agonizing over finding just the right "tablewear" and just when I was in deep despair I remembered that I have a treasure trove of fabrics in my closet ... and lucky me - do I have the PERFECT fabric for a table runner.  Goes to show you that the instincts to buy cool/unique fabric for some future project really do pay off.  The sales receipt was still attached - I bought the fabric in 2002. 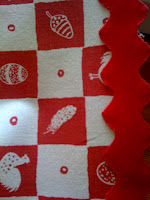 We are busy as beavers working on the "deets." You are going to wish you were a guest!!

Eggplant Parm....is my FAVORITE food!! I'll share 2 ways of preparing it - the way my Mom (and Nana) do (did) it and a gluten-free version so Jim can enjoy it!! 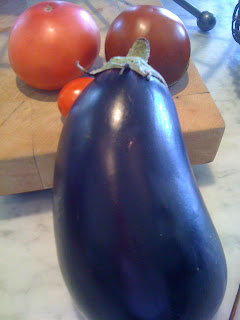 Peel the eggplant and slice thinly crosswise.  Prepare a place where you can bread all the slices as follows:
Lightly coat an eggplant slice with breadcrumbs. (You can use store-bought or simply make your own by toasting some Italian bread and then placing in a blender, add salt, pepper, parsley, parmesan cheese etc.) Then dip the eggplant slice in an egg and milk mixture (I use 2 eggs and enough milk to thin it, but without being too watery).  I then bread both sides of the slice and place on a cookie sheet.  Continue until you have all your slices coated.
Tip: You may need to refresh your egg and milk mixture as some of the bread crumbs will fall off into the mixture which makes it too thick - you can add more milk or start fresh - it's up to you!!  I also have to clean my fingers after 4-5 as they get coated with egg and breadcrumbs.)

Here's another choice - you can oven bake them or pan fry them. I do both depending on my mood, the heat and how much time I have!!  To pan fry, add enough oil (you can use canola or olive oil depending on your preference.  Canola cooks at a higher heat so the eggplant will get crispier, faster - but again - it's a choice in technique, time and taste!!) Place slices in heated oil and cook until golden brown on both sides, remove and place on another pan lined with paper towels.  Continue until complete.  If baking, heat oven to 425 degrees.  Coat baking sheet with oil.  Place baking sheet in oven for a few minutes to heat oil, then take sheet out and add eggplant in single layer.  Bake for 5 minutes until golden and flip the eggplant and bake for another 5 minutes.

Once complete, you'll need sauce.  Tomato sauce is available pre-seasoned in jars or make your own.  In the middle of summer nothing beats using your own tomatoes - chopped with some fresh basil, salt and pepper and a pinch of sugar to cut the acidity and even a splash of red wine.

Spread some sauce on the bottom of a baking dish. Place one layer of eggplant, add some sauce sprinkle with grated parmesan or pecorino romano (again a taste preference), sprinkle with mozzarella and repeat until done.  Bake in 375 degree oven until bubbling and cheese has melted.  Take out of oven and let set for a few minutes before serving.  Enjoy with a side salad!!

Take the slices of eggplant and brush both side with olive oil and place in a single layer on a baking pan.
Bake in 425 degree oven about 10 minutes each side until lightly browned.
Spread some sauce on the bottom of a baking dish. Place one layer of eggplant, add some sauce sprinkle with grated parmesan or pecorino romano (again a taste preference), sprinkle with mozzarella and repeat until done - sprinkle the top with some gluten-free breadcrumbs or cornmeal.  Bake in 375 degree oven until bubbling and cheese has melted.  Take out of oven and let set for a few minutes before serving. 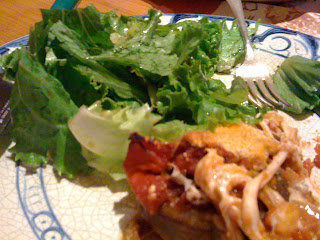 Enjoy with a side salad!!