Today on Heirloom Meals Radio, 97.7 FM WBCR-LP Great Barrington, Carole reminisced with the author of "Born Round," Frank Bruni, about the virtues and vices of growing up in an Italo-American household during the 70's. Describing food as the greatest currency, Frank shared with our listeners a wealth of memories that highlighted the immigrant ideologies that kept him well-fed, well-mannered and well-rounded, at times, to a fault. We encourage you to both listen in and turn the page to Frank's delightful and genuine experience as a boy with a ferocious appetite and a family who wouldn't take "No" for an answer.

Life at Boulderwood:
A Fisher Cat, Up a Tree

Here on Boulderwood Farm we have animals in barns, cages, coops, houses and pastures but there are other creatures that lurk in the neighboring woods that don't inspire as much affection as the aforementioned.    The other day at lunch Jim was telling us about the local and elusive fisher cat who's haunting child-like cry is virtually the only indicator of its presence. Its build is a strange one as it looks like a bear and weasel's love child.  Several years ago some of our neighbor's dogs had cornered one up a tree and we all went over to see what they were making a fuss about.  After a while the cat surprisingly started making its way down the tree despite the pack of eager dogs circling at the bottom.   However, the dogs must have also been aware of the cat's aggressive and nasty reputation because we were shocked to watch as the animal was allowed saFe passage back into the tree line without any interruption.

Here is a YouTube video from Andover, MA where a woman's dog also had a fisher cat up a tree. Not so sure we agree with how she calls it baby, though.  These animals supposedly eat porcupines....

Heirloom Meals is going on a road trip!

Heirloom Meals will be performing 2 cooking demos there but with all that we are involved with this summer we have yet to decide what we will be sharing with our audience. Do you think you have a cherished family recipe/menu that could wow our fall crowd? As you know, we are always keeping our ears, eyes and mouths open to your dishes and stories so let us know!
Total Comments

What makes everything taste better but makes some things smell worse? 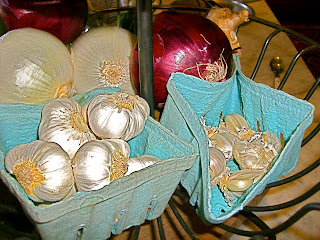 No matter who has been a guest on Heirloom Meals Radio we are always being handed recipes that use garlic.  Lucky for us, we happen to have garlic in all its forms around Boulderwood Farm and enjoy its delights in our meals at least once a day!  We pulled up one garlic bulb today and it appears as though my crop needs at least two more weeks until they can be harvested. 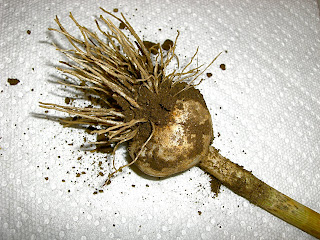 Although garlic bulbs get most of the press, garlic scapes, which used to be considered compost - not an ingredient, are the staple of our homemade garlic scape pesto.  You can also use them as a kind of exotic, sculptural floral arrangement! 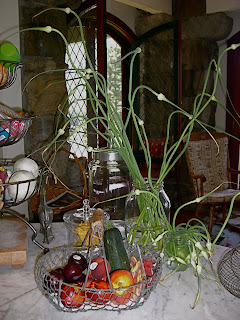 To make garlic scape pesto you have to muster all of your concocting genius. As a start, put 15-20 garlic scapes (cut into pieces) into a Cuisinart and add olive oil until you have a desirable consistency.  I like to add a handful or two of walnuts and grated parmesan cheese to taste.  If you have fresh basil or some other herbs/nuts/spices etc. you want to experiment with - throw them in!  Pesto is great on sandwiches, pasta, crackers, chips, cheese and a whole lot more so have no fear; whatever you come up with is bound to be good on something! Also, make lots of extras as this concoction freezes brilliantly. 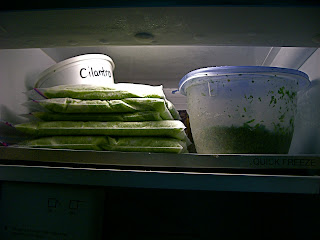 One last thing about garlic...
If you would like to plant some garlic of your own stay away from supermarket bulbs since most of them have been genetically modified to the point of no return. Visit you local farm or farmstead and pick up the healthiest looking bulbs there and plant them in deep, rich, full sun soil around Columbus Day. 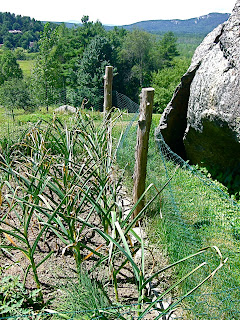 Does farming have to be overwhelming? This question has plagued me since I started interning in Massachusetts. Are you always just catching up with everything that needs to be done? Are projects never finished? There must be a way to be both busy and on top of things. I think that you could stay at a farm four twenty four hours a day and still find things to do that are fairly important. But you should be able to complete the important things. I think that the measure of success of a farm should not only be whether the farm is financially viable but whether those important things get accomplished when they need to. 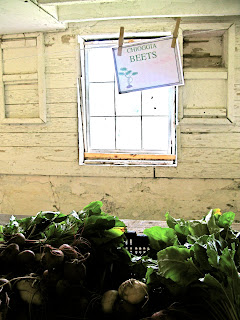 A measure of a farmworker's value is not how many beets or potatoes they can coax from the neglected beds, but what they contribute to the organization and stability (monetary or otherwise) of said farm, beyond the simple day to day. If you haven't ever been on a farm or don't feel involved in your CSA or haven't experienced a farm in awhile, it would do you well to take a tour if you are interested in understand what goes on behind your veggies. These weekly blog posts only let you see a little behind the camera.
--
thou mayest...timshel
Total Comments

Today we had Ruth Reichl join us for an amazing interview. Watch the video, or listen to the voice-only recording and learn about Ruth's both humorous and unconventional beginnings as a food eater and critic along with her insights to where food is going today and what this generation has to offer.  This video is the first in a six-part series of Ruth's radio interview.  Enjoy!