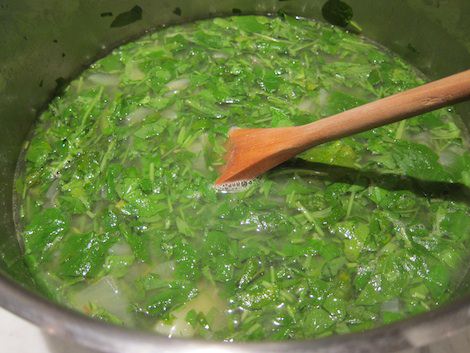 When I think of watercress, English tea sandwiches come to mind. And they are quite tasty.  But what if it’s freezing cold outside, you’ve consciously turned your heat off for the season and you need a little bit of something to warm your insides and your hands.  Last week when preparing for a small dinner party I was planning on a watercress salad with a tarragon vinaigrette. But I was so chilled I decided to make soup instead.  I thought, what if I made a Watercress and Potato Soup?  (Analogous to Potato Leek.)  So, I took my potatoes and onion, some chicken broth and voila!

If you are eating the soup "chunky", make sure you discard the tough stems of the watercress. Can be made ahead and reheated.