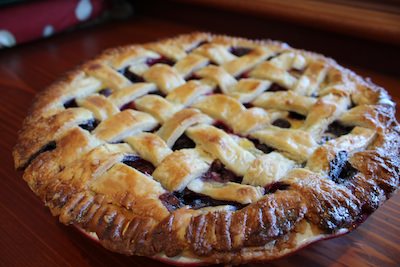 This is a heirloom recipe from Scott Keough, the only difference is that we used my famiy's sour cream pie crust recipe. The rest of this creation is totally on Scott!  He was teaching his six year old daughter how to make his mother's homemade blueberry pie.  They happened to be making a pumpkin pie the same day and had left over evaporated milk. As they were baking, his daughter was trying to help and spilled the evaporated milk mixture into the blueberry pie. They decided to bake the pie anyway, and when it came out the oven his wife just loved the pie!  Over the years it was changed a bit and became known as Jessica's Blueberry Pie named after his daughter. Isn't that precious?

The recipe called for a beautiful brown crust, try using the left over evaporated milk as the wash. Also, if you don't have time to soak the tapioca overnight, an hour will do.