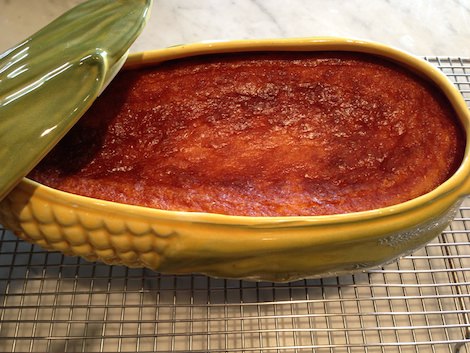 My friend David Moore asked me to cook up a casual dinner, saying "In the interest of this being an heirloom meal, I thought you should make corn pudding." I said, no problem. So I googled corn pudding, printed a couple of recipes and then adapted them into my own. I thought I was making DESSERT!

You can only imagine how surprised I was when David put the corn pudding on the table. I proclaimed, "Shouldn't we wait until after the main course?" To which David responded, "It is part of the main course." And I burst out laughing, admitting I thought it was dessert and I even made whipped cream to go on top!
And boy was it delicious. This is a keeper and I was told it was better than his Dad's!