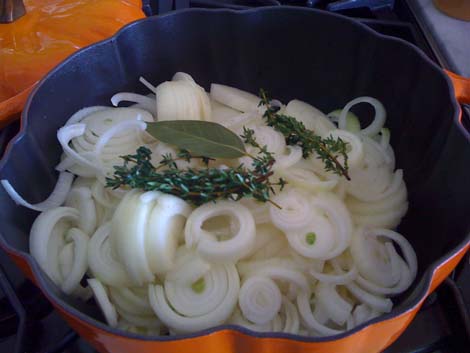 Inspired by Elizabeth Bard's Lunch in Paris, I am now addicted to onion soup and its simplicity.  Her tip was to caramelize the onions in the oven and it works magically and effortlessly while filling the house with a heavenly aroma.  I added more onions and I make my beef stock with beef bones but store-bought broth works wonders.

Experiment with cheeses. Many people don't like gruyere. Swiss cheese works and cheddar adds a smooth mellow flavor. Don't leave out the sherry - it is the secret ingredient that makes the soup extra special!! For gluten intolerants - leave out the bread - the cheese still melts and adds the desired effect.