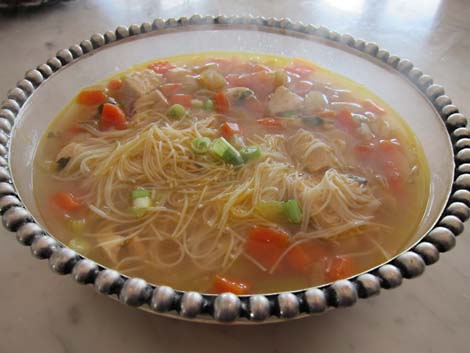 This soup was adapted from my grandmother’s recipe. My meme’ was French Canadian, born in Quebec City and made chicken soup year round. She was a purist, and believed that onion, celery and carrots were the only vegetables worthy of her soup. Depending on what was available, she would use rice or macaroni, never potatoes, as the starch.

My future daughter in law was born in Korea. When we visit Shane and Sophia in New York City, we always end up Korea town and feast on man doo and the Korean version of chicken soup. When I first had it, I made my version based on my grandmother’s simple soup but added an Asian flair!

It amazes me that recipes are universal. When I lived in Housatonic for over 20 years, my polish neighbor made a similar chicken soup but used potatoes while my grandmother thought potatoes would ruin the soup! My Italian father in law makes a minestrone version of chicken soup adding what ever is fresh and available from his garden.
I’m looking forward to hearing about all types of chicken soup even though I know I will never venture too far from Meme’s tried and true recipe!

If you don't have shop sticks, break up the rice noodles so they are easy to scoop up with a spoon! And this is also gluten free!