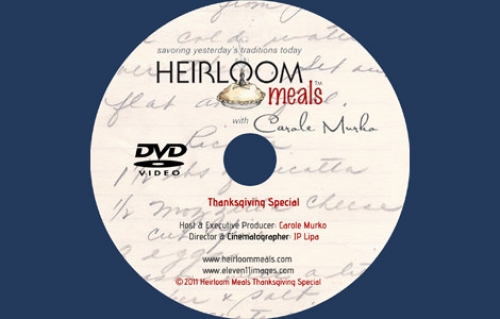 Heirloom Meals’ Thanksgiving is an hour-long made-for-television program capturing recipes, stories and the deep connection between food, family and heritage.

Heirloom Meals is a storytelling show about treasured family recipes, stories, and tips...savoring yesterday’s traditions today. The Thanksgiving Special features people from across the country and across cultures, as they talk about their favorite Thanksgiving recipes and memories. Featured interviews range from a direct descendant of the pilgrims to a newly minted citizen; from a Midwestern housewife to a Southern gentleman to an Italian grandmother. In an interview with a butcher who sells only local pasture-raised meats, we learn the importance of sustainable farming and of buying local food. “At Heirloom Meals, we believe that food is our connection to our past and it is the bridge to our future,” said Murko.
The program was filmed on location in the Heirloom Meals kitchen at Boulderwood Farm in beautiful Stockbridge, Massachusetts with sweeping views of the Berkshire countryside. Stockbridge was the home of Norman Rockwell, and there is a segment at the Norman Rockwell Museum in front of the iconic painting, Freedom from Want. This famous Thanksgiving painting strives to capture many aspects of the idealized American Thanksgiving.

FEATURED RECIPES (available as an ebook or downloadable PDF)

If you'd like the recipes from the show, check out the Heirloom Holiday Recipes book above. Available as a downloadable PDF and ebook.